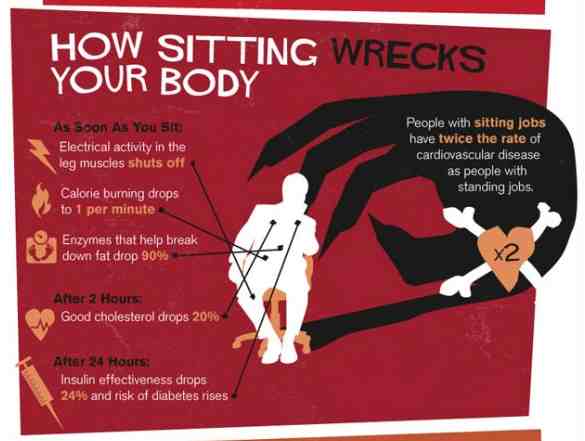 This is part three of a ten part series on the Habit Pyramid, a set of ten core habits that allow us to live purposefully in spite of modern challenges. Read parts one and two here.

I’ll bet each of us spend most of our days doing the exact same thing – sitting.

We sit to commute. We sit at our desks. We sit to relax at the end of the day.

And it’s literally killing us.

Study after study has documented the results. This excerpt from the NY Times summarizes it well.

“This is your body on chairs: Electrical activity in the muscles drops — “the muscles go as silent as those of a dead horse,” Marc Hamilton says — leading to a cascade of harmful metabolic effects. Your calorie-burning rate immediately plunges to about one per minute, a third of what it would be if you got up and walked. Insulin effectiveness drops within a single day, and the risk of developing Type 2 diabetes rises. So does the risk of being obese. The enzymes responsible for breaking down lipids and triglycerides — for “vacuuming up fat out of the bloodstream,” as Hamilton puts it — plunge, which in turn causes the levels of good (HDL) cholesterol to fall.”

More time at the gym probably won’t help either.

“Even if you get up in the morning, get on your treadmill for 30 minutes, and you think you’ve done your exercise for the day, and then you just go sit around and do nothing, you’ve unwound all of that benefit you made in the morning,” epidemiologist Steve Blair concluded from his most recent study.

Thankfully, there are some simple things you can do.

A recent Australian study showed that even small breaks for movement made a big difference. Walk to the water cooler or to visit a colleague. Simply stand up to stretch. Reach tie to untie and re-tie your shoes. Every movement matters.

If you need help remembering, set a reminder on your computer or phone. Here’s a how-to for Windows users and for Macs. E.ggtimer.com is also a simple alternative.

I started using my standing desk nearly two years ago and can’t imagine switching back.

The design is very simple. The base consists of two Omar shelving units, and the top is a Vika Amon table top. The total cost is less than $125 from Ikea. A standing mat is also important, particularly if you’re standing on a concrete floor. (And be sure to think through your choice of shoes.)

Recently, I even came across a portable option when I saw their project on Kickstarter – the Ninja Standing Desk. How fun is that?!

3. Cut back on the television.

The results of a study from the Harvard School of Public Health showed that more than two hours of TV viewing per day increased risk of type 2 diabetes and cardiovascular disease, and more than three hours of daily viewing increased risk of premature death. Based on disease incidence in the United States, the researchers estimated that among 100,000 individuals per year, each 2-hour increment in TV viewing per day was associated with 176 new cases of type 2 diabetes, 38 new cases of fatal cardiovascular disease, and 104 new cases of all-cause mortality.

Call up a friend and have a conversation. Walk around the block. (Take the dog if you have one.) Play a board game. Learn something new. (TED is a fun place to start.) Read a book. Start a business. (I accidentally stopped watching television over a year ago, and it was the best thing that ever happened to me.)

How many hours a day do you typically sit? What can you do differently? I’d love to read your ideas in the comments.