Leadership Essentials: the One on One 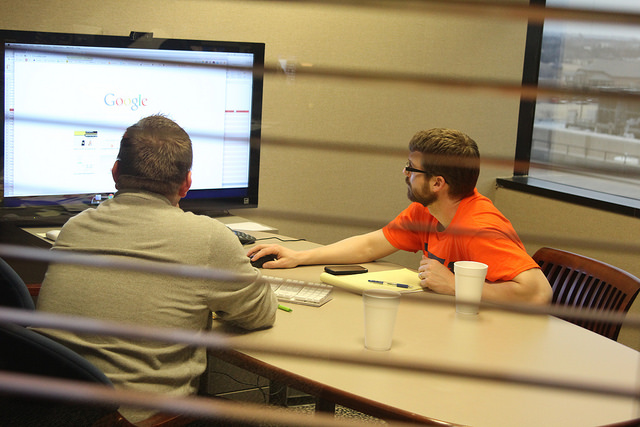 “Generally, people who think one-on-one meetings are a bad idea have been victims of poorly designed one-on-one meetings. The key to a good one-on-one meeting is the understanding that it is the employee’s meeting rather than the manager’s meeting. This is the free-form meeting for all the pressing issues, brilliant ideas and chronic frustrations that do not fit neatly into status reports, email and other less personal and intimate mechanisms.” – Ben Horowitz

If you’re reading this, I’m going to assume you agree that one-on-one’s are a useful leadership tool. (If you don’t, that’s okay too. Go read this instead.)

Let’s focus on how to get this process started.

A. At your next team meeting, announce that you’re going to be having meetings with each person in the next week.

B. Set appointments with each person on your team without much explanation.

C. Call your team member and ask if you can come by their office in a few minutes. Repeat.

In my experiences, all but C have been a disaster. Folks worried that something bad was about to happen, or that they were in trouble. It turned a positive intention into a massive distraction.

For most of us, this means reducing the amount of time between the team knowing about the first meeting and actually having it. Go with Nike on this one. Just do it.

There’s a good chance they’re feeling anxious. Your first goal is to put them at ease.

“Jane, I’ve been recently learning about how to be a better leader, and I realize that one of the most important things I can spend time on is making sure you achieve your goals. If you’re doing well, chances are I am too. So, would it be okay if we started talking about that?”

Depending on how different this is from your normal conversation, they may be looking at you like you just grew a third eye. That’s okay. Keep going.

“Can you tell me about what you’ve been working on?”

“What part of it is the most fun for you?”

“Are you running into any obstacles?”

“What suggestions do you have?”

“What else would you like to work on or learn?”

“What can I do that would be helpful?”

Try not to end the conversation without finding one helpful thing you can do, even if it’s incredibly simple.

Fix their sticking door or replace their worn out chair. Order a small heater if their office is freezing. Facilitate a meeting with another department to get alignment.

The key is to identify something tangible and commit to it.

As you close, set up a time to meet in again in one week. (Two if you must.)

“Think about what we talked about, and let’s talk more next week. I want to be more supportive.”

In many cases, the first meeting will feel like cutting your lawn with scissors – a massive amount of preparation and listening for little feedback.

That’s natural. It can take a while to build trust, especially if your organization’s culture has historically been competitive or gossip-filled. It may take a few meetings before your team members are comfortable asking for your help. To do so, they’ll need to be vulnerable.

The only way to overcome this is to go through it.

At each meeting, make a commitment and deliver on it – with no strings attached. (That’s what leaders do.)

Do that for a few weeks in a row, and you’ll be shocked at how much communication will improve.

(And that intro line about you succeeding when they do? It’s more than a conversation starter. It’s true.)

About a year ago, I was also filling a director level position and added that team to my one-on-one list. When I started the conversation with one manager by saying that I wanted to know what I could do to be supportive, her jaw dropped. She replied that she thought I didn’t like her. Her feelings were based on our morning interactions (or lack thereof). I had often passed her office in the hallway without saying hello.

Needless to say, I had no idea that my actions were being interpreted this way. I listen to podcasts on my long commute and would often hustle to my office to make notes or take a quick action before I forgot. I didn’t realize that I wasn’t acknowledging people. When I asked some other team members, they replied that they thought I was mad in the mornings.

I can’t tell you how thankful I was for the feedback from the first manager. And I’d likely have never received it if I hadn’t been committed to one-on-one meetings and asking real questions.