What Susan B. Anthony Can Teach Us About Changing the World 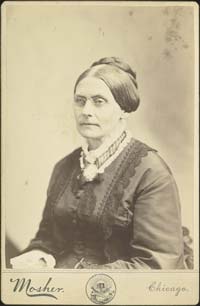 Recognized as a pivotal figure of the 19th century, the life of Susan B. Anthony offers valuable lessons in leadership. Few figures in history are credited with greater accomplishments.

As the New York State Senate recognized in a resolution of remembrance, Anthony was known for her “unceasing labor, undaunted courage, and unselfish devotion.” Despite failing to achieve her goal of equal political rights during her lifetime, she never wavered in her passion and confidence.

Cautious, careful people, always casting about to preserve their reputation and social standing, never can bring about a reform. Those who are really in earnest must be willing to be anything or nothing in the world’s estimation.

Through her words and writings, Susan B. Anthony’s approach to societal reform provides a generous roadmap for future leaders.

In her youth, Susan B. Anthony was very self-conscious of her appearance and speaking abilities. She initially resisted public speaking.

At 28, a hesitant Anthony gave her first speech as Secretary of the Daughters of Temperance, an organization that called attention to the effects of drunkenness on families and pushed for stronger liquor laws. A year later, she became their President, a position that required her to speak frequently for fundraising efforts.

Despite feeling that she was a poor speaker, Anthony persisted, accepting multiple invitations to share her message.

In 1853, a confident Susan B. Anthony emerged. When refused the right to speak at the state convention of the Sons of Temperance in Albany, she left the meeting and called her own, speaking with eloquence and determination.

For decades thereafter, Anthony would travel the country giving hundreds of speeches. She is perhaps the most renowned public presence of her era, literally becoming the voice of the women’s rights movement.

Susan  B. Anthony may reside alone on the backside of a coin, but her legacy may never have existed without the encouragement and support of a dear friend. In fact, Anthony did not initially understand the importance of women’s rights. After meeting her at the Seneca Falls convention in 1851, it was Elizabeth Cady Stanton that “convinced Anthony that women could not be effective reformers without the right to vote.” Even when pregnant and homebound, Elizabeth would prepare speeches for Anthony to deliver at conventions or on the road.

I want you to understand that I never could have done the work I have, if I had not had this woman at my right hand.

Even more surprising, the two could be considered opposites. They came from entirely different backgrounds, one poor and one well-to-do. They also disagreed on many nuances of the suffrage movement, Anthony narrowly focused and Stanton preferring a more broad approach. Despite their differences, the two recognized that they were more effective when working together. That sentiment was clearly documented in Stanton’s 1887 letter in preparation for a convention of the International Council of Women where she cautioned Anthony to “not get up more machinery than you can manage. You err on the side of details and I on the opposite extreme. Let us try and strike the happy medium and leave something to peoples common sense.”

For Anthony’s birthday in 1900, Stanton penned a touching poem, capturing the spirit of their determined friendship.

We met and loved, ne’er to part,
Hand clasped in hand, heart bound to heart.
We’ve traveled West, years together,
Day and night, in stormy weather;
Climbing the rugged Suffrage hill,
Bravely facing every ill:
Resting, speaking, everywhere;
Oft-times in the open air;
From sleighs, ox-carts, and coaches,
Besieged with bugs and roaches:
All for the emancipation
Of the women of our Nation.

3. You may not live to see the change you seek. Do it anyway.

On November 1, 1872, Anthony registered to vote, arguing that the 15th Amendment’s reference to the “right of citizens of the United States to vote” included women. She cast her ballot in the presidential election on November 5, and was soon arrested by the US Deputy Marshall for voting illegally. During her trial, the judge refused to allow her to testify and instructed the jury to return a guilty verdict without allowing any discussion.

Fined $100, Anthony never paid it and petitioned the US Congress to remove it in 1874, noting that she would “never pay a dollar of your unjust penalty.”

On her 86th birthday in 1906, Susan B. Anthony shared her final public speech.

She passed away one month later, 14 years before the 19th amendment to the United States Constitution was passed.

The champion of the women’s suffrage movement died without being allowed to cast a single legal vote. However, her legacy lives on through the millions of American women that now have a voice.

Susan B. Anthony: Celebrating a Heroic Life, University of Rochester

Susan B. Anthony Petition for Removal of Fine, 1874, Wikisource

Elizabeth Cady Stanton & Susan B. Anthony: A Friendship that Changed the World