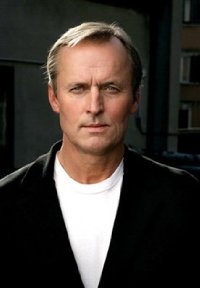 I’ll always remember the summer of ’92.

My Mom had become very sick the year before, and my middle school life had been turned upside down. During one of our monthly lunches at Wendy’s (because we both loved the unusual salad bar), she gave me a copy of The Firm. I disappeared for days into Mitch and Abby’s fast-paced world, forgetting my own tough reality. Next, I joined the characters within The Pelican Brief and A Time to Kill.

In the midst of that difficult summer, I immediately understood the power of a story. My life-long love affair with words had begun with a legal thriller that almost never saw the light of day. As I devoured story after story, year after year, I wanted to know more about the man behind them.

Inspired by the chilling testimony of a young girl in a Mississippi courtroom, John Grisham somehow found time to write his first novel while maintaining his legal practice and serving in the state legislature. To anyone seeking to do great work amongst the demands of daily life, Grisham’s own story is as riveting as any he created.

My goal, when I started the book, was just to finish it. ‘Cause I’m always starting a new project and never finish….I worked on it for three years. I remember I had to go to court sometimes at 9:00. And I can remember just sitting in court being dead tired ’cause I’d already written for three hours. And it, you know, it’s draining. When you do it a lot it really takes a lot out of you.

Grisham finished his book – and many others, through a blend of dogged determination, fanatical consistency, and detailed planning.

1. Believe enough in yourself and the power of your idea to see it through.

In many ways, Grisham’s first novel was a fictional autobiography that could never have been written without his experiences as a lawyer. After a chance encounter with the defendant in a brutal rape trial, Grisham wondered how the story might have been different if the girl’s father had chosen revenge over the legal system. The young girl’s real life testimony had moved him to tears and the story consumed him. Grisham and his lead character, Jake, were the same age, had similar backgrounds and families to support.

When I started writing in the fall of ’84, I had no idea what I was doing, but I was motivated for all of the right reasons. I had a story to tell and I wanted to see whether I could tell it.

His life’s work experienced a very humble birth. Initially rejected by dozens of publishers, Wynwood Press (a tiny and now defunct publishing house) bought the manuscript and printed 5,000 books – 1,000 of which John bought and lugged on a southern book tour he scheduled for himself.

Immediately after completing A Time to Kill, Grisham (nearly broke and exhausted) started writing his second novel, The Firm. This dogged determination would lead to the lucky break that made his career possible. An unauthorized copy of the manuscript was taken from New York to Hollywood and unknowingly shopped to major production companies. They liked it enough to make several offers. The situation was sorted out, and the rest is history.

2. Whatever you aspire to do, routinely do it every (work) day.

When he first started writing, Grisham designed a challenging daily ritual. Awakening to his alarm at 5:00am sharp, he would hustle through a shower and to his office five minutes away. He required himself to be at his desk, with his coffee and legal pad, writing his first words by 5:30am. Frequently needing to be in court or client meetings before 9:00am, Grisham knew these quiet hours were critical to finishing his book.

Since retiring from law practice to become a full-time writer, Grisham has maintained a similar rigorous schedule. He writes from August to November each year, from 6:00am to noon, five days per week. His goal is to submit the draft on November 1, with three intense weeks of revisions to have the book completed by Thanksgiving. They go to press in December and go on sale February 1.

Noting how powerful his habits are, Grisham revealed that he still “writes at the same place, same table, same chair, with the same cup and type of coffee.”

3. The planning is more important than the doing.

Learning from the painful editing process of A Time to Kill, Grisham quickly learned the importance of extensively outlining his books in advance. His method is to write a paragraph or two for each chapter, and this often takes longer than actually writing the book itself.

The more time I spend on the outline, the easier it is to write the book.

Describing this method as the “secret” to his literary success, Grisham has specific requirements for his outlines: the beginning must be captivating, the middle must be able to sustain the plot, and the ending must be unpredictable. By creating an in-depth outline first, Grisham can ensure that the story meets his own standards. As he says, “the outlining process is no fun, but it forces the writer to see the entire story.”