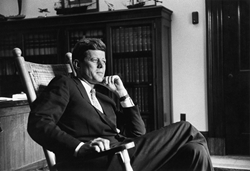 Much has been written about the 35th President of the United States, John F. Kennedy. To many, he is regarded as one of the greatest leaders in American history. Others are disappointed by the disconnect between his private life and public persona.

Regardless, it is clear that he overcame significant personal challenges to achieve election to the highest office in America. It is through that lens that we’ll offer insights into his particular recipe of habits.

Growing up in extreme privilege certainly had its benefits, and a young Jack Kennedy did not hesitate to enjoy them. However, wealth and connections alone can not explain his success. It was borne of an innovative combination of personal discipline and situational creativity. And later in life, at the pinnacle of success, new adaptions would be needed to effectively carry out the duties of his office. Again, Kennedy would be up to the challenge.

1. Kennedy believed that one could enjoy the world and also work to improve it, using every opportunity to build his knowledge.

I saw how ideally politics filled the Greek definition of happiness – “a full use of your powers along lines of excellence in a life-affording scope.”

During college, Kennedy embarked on a grand European tour, enjoying all the benefits his father’s status had to offer. In addition to the opulent experiences, young Jack kept a diary that recorded his thoughts about international affairs. As the two-month journey came to a close, Kennedy posed a series of questions to himself as insightful as any journalist or diplomat might offer.

In his senior year of college, it was clear that Kennedy was embracing his role as a student of government. His course work included four classes focused on contemporary international politics, and the intense drive that consumed him while writing his senior thesis demonstrated his capacity for academic study and analysis. Not satisfied with the information available in libraries, Kennedy recruited US embassy press secretary, James Seymour to send him printed political pamphlets and other publications from Great Britain.

Again in 1945, Chicago millionaire Pat Lannan told Kennedy that he did not know enough about labor, an issue he believed was going to become a driving force in the United States. Accepting the challenge, Jack asked his father to send a crateful of books on the subject. Lannan noted that Kennedy would stay up late each night, reading until the entire crate had been completed.

Even as President, JFK is reported to have begun his day reading five newspapers each morning. His intense quest for knowledge, particularly about current events, was never satisfied.

2. Through his frequent health concerns, Kennedy learned to face his challenges stoically.

Beginning three months before his third birthday, Kennedy faced a litany of health issues throughout his entire life. Beginning with scarlet fever, then baffling digestive issues that would plague him for decades, and eventually chronic back pain, Jack learned to suffer quietly and patiently at a very young age. As a Kennedy, Jack was taught my his mother that people as fortunate as they were should be silent about their adversities.

Frequently interrupting his studies, a young Jack faced his chronic digestive issues with humor and patience. Evidenced in his writings, Jack endured years of painful tests, all mostly fruitless. Instead of complaining, Jack worked hard to overcome and ignore his health problems. Close friends frequently commented that he wouldn’t talk about or even acknowledge his sickness or his aching back.

After enlisting in the Navy, Kennedy even sought out service on a PT boat, believing it to have the most impact during the war. With his powerful father’s intervention, Jack was cleared for sea duty, though few can comprehend how he managed his pain during his 17 month tour on the Pacific.

Captured in a line from his father’s letter in September 1840 during the Battle of Britain, it is clear that Kennedy was able to turn his attention from his personal struggles to that of his country’s.

For a man with a weak stomach, these last three days have proven very conclusively that you can worry about much more important things than whether you are going to have an ulcer or not.

3. Recognizing the increased demands of the Presidency, Kennedy adapted to the longer days and incessant stress by taking naps and exercising.

When I ran for the Presidency of the United States, I knew that this country faced serious challenges, but I could not realize  – nor could any man realize who does not bear the burdens of this office – how heavy and constant would be those burdens.

As wife Jackie later noted while encouraging LBJ to adopt the same practice of napping, “it changed Jack’s whole life.”

Just after lunch, Kennedy would settle in for a 1-2 hour nap. Head of the household staff, JB West, recalled that “during those hours the Kennedy doors were closed. No telephone calls were allowed, no folders sent up, no interruptions from the staff. Nobody went upstairs, for any reason.” About 3:30pm, Kennedy would return the Oval Office for meetings or briefings and work until about 8:00pm. Then he would freshen up for dinner, often staying up late into the night.

Exercise also became an important of JFK’s daily routine. An avid swimmer, he would hit the pool twice per day. In 1961, the President also began treatment with Dr. Hans Kraus, a New York orthopedic surgeon, consisting mainly of targeted exercise sessions. In fact, the sessions quickly became a part of Kennedy’s daily routine, providing pain relief as well as a pleasant break from the daily demands of the office. Although Kennedy his much of the details of his treatments for political fears, the structure of his days is clearly evident in his daily diaries.

The Napping Habits of 8 Famous Men, Art of Manliness