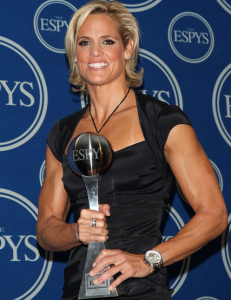 Called the greatest athlete of our generation by Malcolm Gladwell, Dara Torres has been swimming at an elite level for longer than most of her competitors have been alive.

After returning to the Olympics in 2008 and winning three silver medals, she was awarded the ESPY for Best Comeback of the Year. That brought her total to 12 medals from 5 Olympic performances. And she only missed a return trip to London by .09 of a second – at age 45.

In sharing her quest for unparalleled excellence, Dara reminds us all that most of the limits on our success are self-imposed – and that we have the power to remove them.

The water doesn’t know how old you are.

We can stage our own “comeback” at any time. As Dara says, “you have to be determined to move closer to reaching your full potential, instead of letting yourself slip farther away.

For her comebacks, Dara focused on what she calls her “three pillars of life” – what she puts into her body (eating), what she does with her body (exercise), and how she recovers.

1. What she puts into her body

Abstaining from coffee and alcohol, Dara describes herself as eating a “normal” lunch and dinner, with a protein drink as a snack in between. After workouts, her recovery drink of choice is chocolate milk.

2. What she does with her body

Dara often recalls the importance of our minds during physical exercise, noting that working out in the water “shows you the contents of your own mind. It teaches you to rein in your thoughts and come back to the present so you can focus on the small details . . . You have to keep bringing your mind back to the task at hand.”

After connecting with coach Michael Lohberg, they realized that less was more. As an athlete-Mom in preparation for Beijing, she swam five days a week for two hours and did strength training four days a week for 90 minutes, roughly half of the workout load she maintained in her youth.

Her strength training, however, was far from the standard stacks of weight. Coached by Andy O’Brien, she trained her nervous system in addition to her muscles, meaning that she focused on reflexes and coordination more than raw power.

As an older athlete, Dara learned the importance of specific forms of recovery: stretching, massage, and sleep.

First, she discovered resistance stretching, a method of building strength and flexibility at the same time. Developed by Bob Cooley during his own rehabilitation from a horrible car accident, the series of sixteen stretches is based on simultaneously contracting and stretching a particular muscle group. Then, she added “mashing” (a form of massage using the feet) that kneads lactic acid and small bits of scar tissue out of muscles and the fascia that surrounds them.

Eventually, she settled on a specific routine: 45 minutes of “mashing” followed by 90 minutes of resistance stretching. “The point was to rejuvenate my body from the inside out, coaxing all of my muscles through their whole range of motion – lengthening all the way out, then shortening all the way in,” Dara says.

And sleep has always been a priority for Dara, even more so as she has focused specifically on recovery. To combat the discomforts of an unfamiliar bed, Dara travels with her pillow. She also maintains a consistent sleep schedule, quieting down and waking up at the same times nearly every day.

Dara attributes her sustained health and performance to her “three pillars of life” – what she puts into her body (eating), what she does with her body (exercise), and how she recovers. For any of us looking to experience our own peak performance, the roadmap she provides clearly leads to a destination of excellence.

Age is Just a Number, by Dara Torres with Elizabeth Weil