Then and Now – Creating a Turning Point with Brett Kelly 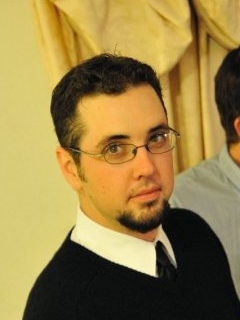 I discovered Brett Kelly in the summer of 2010 through a mutual love of Evernote. I’d played with the service and realized I was only scratching the surface of its potential. A quick Google search turned up his recently released ebook, Evernote Essentials. I bought it immediately and felt my memory and organizational capacity expand overnight.

At the time, I was part of a business project making an early attempt at online learning. Knowing what a difference Evernote and his guide had made in my life, I cold-emailed Brett to ask if we could use his guide as the foundation for a new course for our students. He agreed immediately and even shared our course with his network – which was significantly larger than ours. Over the years, we kept in touch through Twitter and met in person at the first World Domination Summit in July 2011. There, I learned that we also shared a common faith and affinity for tattoos.

But it wasn’t until I read Chris Guillebeau’s $100 Startup that I knew the full story.

After several stressful years of working opposite schedules with his wife to make ends meet, Brett had the idea for his ebook and worked for months to make it “exactly right.” Right before the guide went on sale, Brett and Joana made a pact. If it sold at least $10,000 worth of copies, she could quit her job and be able to stay home with their kids full-time.

Eleven days later, they’d made their goal, and she put in her notice at the restaurant. To date, the guide has generated more than $160,000 in revenues. In an even more incredible twist, the CEO of Evernote was so impressed with the guide that he hired Brett, allowing him to work from home as well (and keep all the profits from his book).

As Brett says, “the unreal success of this project has not only freed our family from a decade of debt and financial instability, but has also given us the freedom to pursue the kind of life we want. Since I now work from home and Joana is a stay-at-home mom, we spend far more time with our kids than most people could hope for. There are times I still can’t believe it’s actually happened, and I couldn’t be more thankful.”

I knew I had to interview him and share more of his story with you.

Brett, thanks so much for taking the time to share with us. I’m honored to have the opportunity to peek behind the curtain on your project and the last few years of your life. I always like to start with the first question, “How do you define success?”

Truth be told, the word “success” has lost a lot of its meaning in my mind. Today, success is generally synonymous with wealth or leisure. It also implies some kind of arrival; when a person is successful, they’ve completed some course or overcome a series of obstacles. I don’t believe success to be as binary as all that.

Most people would consider me “successful”. I earn a good living, live in a nice house with a beautiful wife and two great kids. My family and I are generally healthy and we can afford to eat and buy clothing and live fairly comfortably. It’s this type of temporal description of success that I have come to dislike.

For me, success means that I’m growing; I work hard every day to be a good husband, father, friend and worker. I have a great marriage and wonderful friendships. My family and community are my priorities above any work I do. And, really, very little of this attitude can be attributed to earning lots of money and has more to do with perspective. This, I think, is what success actually looks like. But that’s just one fellow’s opinion 🙂

That concept of always growing personally really resonates with me. So, was there a time when you had a different definition? What changed that?

I used to think that success meant money and, by extension, a lack of worry or anxiety. Then I started earning more money and realized what an absurd notion that is. Earning additional money certainly solves some fundamental problems and adds security against things like hunger, homelessness, etc., but those needs can (and usually are) met by much less. The change, I suppose, can be traced to a point in time where my self-concept was extricated from how much money is in the bank. Like most people, my earning potential is quite large — but working oneself to the point of exhaustion just for more money (which is exactly what I did for a couple of years) is to miss the point.

The quality of my relationships began to diminish. When I’d go for weeks without seeing my very closest friends because I “had to” finish a project, that was a huge red flag for me and, in one of my smarter moments, took notice and reevaluated my attitude toward work, money and success.

The book described a significant turning point in your life. Can you describe a typical day “before” and now?

My days “then” were hectic. I worked a full time job about 40 minutes from home while my wife stayed home with our kids. I would fly home as soon as I could after work and she would leave for her night job as a waitress. After I played with the kids, fed them dinner and put them to bed, I’d head to my desk and start cranking on whatever freelance project I was working on. I would do that until 11pm (or much later, sometimes). I’d fall into bed exhausted and start the whole screwed-up mess again the next day. Rinse, repeat.

My days now are fairly unremarkable, which I like. I have a day job for which I work the typical 9-5 hours each weekday. After work, my family and I typically have dinner and try to do something fun before my kids head to bed, or sometimes my son has baseball practice and we go to that. After the kids go to bed, I’ll work on things *I* want to work on: ebook updates, blog posts, new product ideas.

I would say I’m about as busy now as I was before, but it’s a business that is centered around my goals for myself and my family. If I want to take a night off (which I frequently do) and enjoy some cocktails with some friends, I’m free to do that. And it’s wonderful.

Do you have any particular habits or routines that are essential? Can you tell us more about how you use them to stay on track?

I’m a big proponent of David Allen’s *Getting Things Done* methodology (described in detail in his book of the same name). Honestly, I’d be way more hosed if I didn’t have a logical, approachable system for managing tasks, projects and commitments. In particular, I have (in OmniFocus, my preferred GTD app for Mac/iOS) daily checklists for both the morning and evening. These include things that many people would consider dumb or obvious, I think, but they help keep me sane. Things like emptying my email and OmniFocus inboxes, checking for stalled projects (projects with no next action defined), looking over all the things I’m waiting for and more personal stuff like saying the Daily Offices. A computer is far less forgetful than I am, so anything I can offload from my own goofy brain to a piece of software is a win for me, even if it’s something trivial.

In the larger sense, I’ve become comfortable with the fact that I’ll never finish everything I would like to finish. This realization has allowed me to be more selective in which projects I pursue and has forced me to become a total stickler for things like email. If all I did was answer every email I got, I’d never do anything else. The assumption that you’re obligated to answer every message you receive—particularly the ones that are a sentence long that, answered properly, would require a multi-paragraph response—is poison. Email is a huge time-suck. Yes, people will get mad if you don’t answer their email, but I’d rather spend my small amount of discretionary free time making something cool than placating every single person who happens to find my email address. (I realize that last bit makes me sound like a huge jerk, but I have to draw the line somewhere and I’m more comfortable choosing creativity and engagement with my work.)

I love the systems and boundaries. Thanks so much for sharing the specifics with us. Are there any habits you’re working to develop next?

Building on the daily checklist thing I mentioned earlier, I’ve become quiet enamored with a monastic principle known colloquially as the “rule of life.” Essentially, the rule of life is a set of standards that govern how one lives and orders ones life around what they truly want and believe.

It involves the whole package, in my case: diet, exercise, spiritual development, temperance in things like alcohol and tobacco. The point is to orient myself toward profitable use of my time, both spiritually and temporally.

I’m hardly a poster child for this stuff, as I sit here, and it’s absolutely a multi-year affair (or multi-decade, probably), but that’s what I’m doing. I’ve got a solid community around me and am driven by more than zeal or fleeting emotion, so I think I have a fantastic chance of making it stick. Time will tell, though.

Well said. I’m on a similar journey as well.

Brett Kelly is a writer and programmer based in Southern California. By day, he’s the Technical Communications Manager for Evernote Corporation where he writes code and develops useful documentation. He’s probably best known as the author of Evernote Essentials, a popular getting started guide for new Evernote users. You can find his writing on Bridging the Nerd Gap, his blog about technology, productivity and creativity.