Why I'm Teaching My Daughter to Break the Rules

I thought writing about cheating was tough, but it pales in comparison to this one. 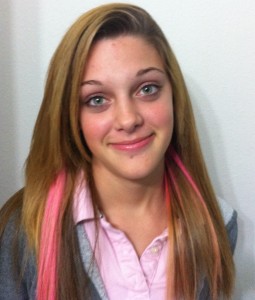 During the Thanksgiving holiday, my 13 year-old daughter dyed hot pink stripes in her hair. Several of her teachers weren’t fond of it, and she almost got a referral to the office. That would have been her first one, but an assistant principal intervened.

When she told me about it, she also explained that she wears a jacket every day because she doesn’t want to wear “dress code shirts.” In addition, she takes her cell phone to school (another no-no).

Two years ago, I would have been very upset. I would’ve also worried about whether the teachers at her school thought I was a “bad mom.”

As a kid, I was a “goody two shoes.” I followed the “rules” outlined by school and society almost without question until I was nearly 30. I wore uncomfortable heels. I bought new cars every couple years. I ate my whole grains. I tried to build businesses without “selling” because that wasn’t appropriate for professionals like CPA’s. I burned myself out making sure I attended every possible meeting. As a result, I often felt like an alien because my preferences didn’t align with those rules.

I finally decided something had to give and started looking for alternatives. It took me another couple of years to realize that I was living my life based on someone else’s scripts. Since then, I’ve done a significant amount of research and thinking about “rules.” My beliefs could not have changed more radically.

Once in a while it really hits people that they don’t have to experience the world in the way they have been told to. -Alan Keightley
(hat tip to Chris Guillebeau)

I believe the first key is to acknowledge that rules and scripts exist and to think through the application and consequences. I’m getting better at this in my own life. I recently wrote about why I’m going to cheat more (and you should too).

But applying this to parenting is incredibly tough. We become very risk-averse. That’s the last thing we want to fail at.

So we take the safest course of action: the default. Normal.

If something doesn’t turn out right, at least it won’t be our fault.

If you don’t risk anything, you risk even more. – Erica Jong

I don’t believe this has ever been more true. The greatest risk facing our children is that they grow up to be cogs on the wheel of a system that doesn’t even work. If we follow the default education system and the standard rules, this is exactly what we’ll prepare them for.

To me, that’s simply not acceptable. I want more for her. I at least want her to know that another option exists.

So we’ve started learning about Rules together.

First, we’ve talked about how rules exist for many reasons.

There’s nothing inherently wrong with any of them, but they’re not inherently right either. That means that we shouldn’t break rules just because they exist, and we shouldn’t necessarily follow them blindly.

I want her to know that this path has consequences, that it can be uncomfortable in the moment, but that it gets better.

The pink hair was a perfect exercise. (I really wish I’d thought of it sooner.) She faced criticism from one teacher in particular and had to address it. She found a higher authority and was able to negotiate the situation without any harmful effects. She knew there was a risk of detention, and she faced it head-on. She also knew I wasn’t going to intervene either way.

I think this is invaluable practice. For example, I can see numerous parallels between this situation and negotiating a flexible work arrangement with an employer or project. She was able to focus the conversation on the function (which wasn’t harmed) instead of the form (which is often rigid, yet rarely matters).

And this only the beginning. Before she’s an adult, I want her to know how to assess a rule and be adept at breaking it if need be.

What do you think? Am I way off track, or does any of this resonate with you?