As I navigated this past week, I realized that one of my favorite things about social media is that you can easily use it to share how someone has made a positive impact in your life. But the character limits kept tripping me up. So, I decided to start using my blog to recognize the rockstars in my life.

And today is the perfect day to begin. My inaugural rockstar is my sister Jessica. She’s my hero, and it also happens to be her birthday today. (Happy birthday Sis!) 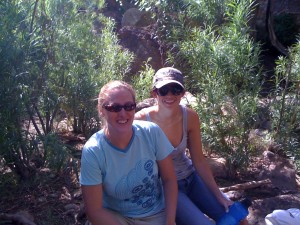 We took this picture at an oasis inside Red Rock Canyon a few weeks ago.

In 1991, when I was 11 and she was 7, our Mom got sick. She collapsed in the bathroom one morning, and for several years, the doctors couldn’t figure out what was wrong. It was tough. About four years later, the family split up and I lost contact with Jess. It’s sad to say, but I almost didn’t notice. I was too caught up in my own pity party, mad at the world because I thought I had a tougher life than others.

And then in 2001, my Papa passed away. We’d been estranged for years, and I didn’t get to say goodbye. I’d say that’s still the biggest regret of my life. Looking back, I’m very ashamed of the way I acted all those years. But at my Papa’s funeral, I vowed to never let that happen again. (And I think he’s forgiven me. I’m pretty sure he’s the one sending me peanut butter burgers from heaven. We always enjoyed them together when I was a little girl.)

I knew the first thing I needed to do was find Jess. It took a bit of searching and several phone calls, but I learned that she was working at a restaurant in Las Vegas. I had a conference there just a few weeks later, so I decided that I would just stop in.

I still remember that day. I walked in and asked for her. The hostess asked who I was. I told her, but she didn’t believe me. She proceeded to ask me a series of questions. I guess I passed the test, and she called Jess. It turns out that Jess was leaving for her Senior trip just a few hours later. She came up to the restaurant and we talked until she had to head to the airport. Although there was a lot of catching up to do, it was as if time had stood still.

Jess welcomed me back with open arms. She never judged me or asked where I’d been all those years. She just put her head down and kept taking one step at a time. I was so humbled. There I had been, feeling sorry for myself, too selfish to notice that my own sister had endured challenges that made mine seem insignificant. And she never complained. She never whined. She just went about moving forward each and every day.

Jess earned her undergrad degree from UNLV and graduated from the University of Colorado Law School last May. She’ll sit for the Nevada Bar Exam next week. She’s supported herself all along the way, and I couldn’t be any prouder of the person she’s become.

Most of all, she taught me about strength and courage, humility and perseverance, compassion and love. And forgiveness.

Jessica, you’re my hero – and I love you. Have a fabulous birthday!

(And I know you’ll rock the Bar next week. Take a day off from studying and enjoy the day.)