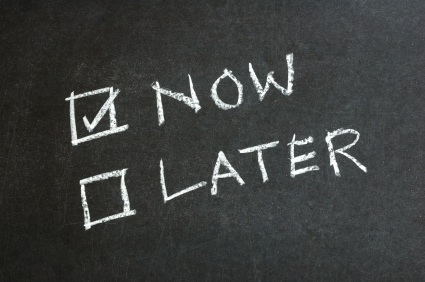 Last week, I announced a blog roundtable on the subject of procrastination. Encouraged by healthy debate on Facebook and Twitter and a number of folks that said they wanted to share their opinion, off we went.

Here are the entries:

In answering the debate, maybe that result speaks for itself?

I dunno. But I’m still happy to be on the other side of it.

I love Michelle’s post. As she describes her war with procrastination, I can remember the exact same battles.

What about you? Are you still battling procrastination? Have you won? Or do you think it’s a helpful tool?

It’s not too late to let us know what you think. (Maybe that’s the problem. As long as comments are open, there’s never a deadline.)