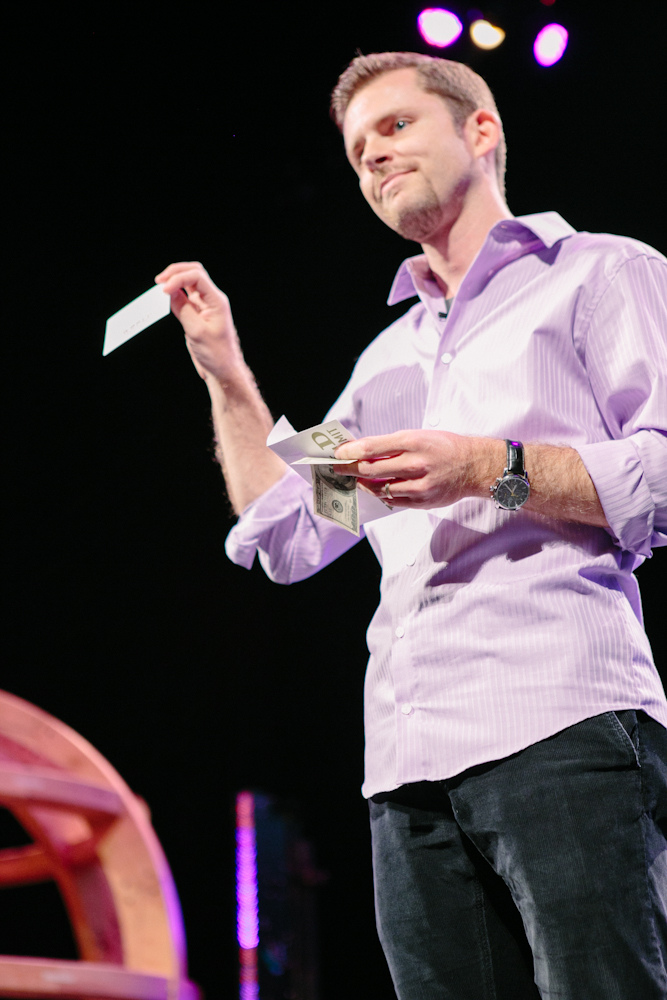 As the World Domination Summit came to a close, host Chris Guillebeau unveiled his latest investment. This conference had been a financial success, and by combining the profits and the contribution of an anonymous benefactor, he’d gathered $100,000 – and he was giving it to us.

We each received a small envelope with a crisp $100 bill and simple set of instructions: Start a project, surprise someone, or do something entirely different.

I knew immediately how I would invest mine.

For the last several weeks, my husband and I have been teaching a class at our church called Startup Summer. It’s loosely based on the principles of Chris’s latest book, $100 Startup. For us, the class pulls together several values that we’re passionate about in an innovative way, and we’re thankful for the opportunity to lead it. In short, we believe it represents a tangible way to healthy success in our modern economy.

I decided that I would give my $100 to someone in the class so that they could fund their own $100 Startup.

In the last class session before the conference, the interaction and ideas were amazing. The enthusiasm radiating from the few dozen people gathered was absolutely contagious. The were building upon each others’ ideas, sharing innovative methods for testing, and committing to firm actions before the next class. On the flight back, I thought ahead to the next day’s class. I knew it would be special.

Some people would have taken those actions and made their first sales. Others would have made some progress, then likely become stuck in the dip. But the successes of the first group would inspire them to overcome whatever obstacle was in the their way. They would know that it was possible for them too.

As we setup the tables and chairs that night, I was anxious. I knew that I was going to share my gift with someone, but I had no idea who it would be. I trusted that the right moment and recipient would reveal itself.

We started the class by going around the room, with each person giving an update on their project. Some weren’t able to attend the last class and were catching up, making their commitments that night. A few had already developed a basic product, tested it with a few prospects, and even closed some sales. They’d made their first profits within 3 weeks of getting started, and that momentum was propelling them to keep moving forward. I can’t think of any sweeter music to my ears.

Then we started talking about obstacles and fears. Not a single member of the class was exempt. For some, it was juggling a new business with an already busy workload. Others were anxious about being vulnerable or revealing their true ambitions to others. Many anticipated pushback from their families and friends. For one class member in particular, I could tell that she was fighting a great battle within.

I recognized the look in her eyes because I had once seen it in my own. With one foot planted in “normal” and one foot dangling over the unknown, the next step was a terrifying one. Would we retreat into the comforts of the familiar? Or would we have the courage to embark on a new journey?

I remembered the first time someone told me they believed in me and backed it up. For me, it was paying for a conference I was excited about but couldn’t afford.

In an instant, I knew it was time for me to pay it forward.

I reached for my sealed envelope. I told her about how it came to be and that a $100 bill was inside. I told her that I believed in her, and that I wanted to share my gift with her. I wanted her to use it to take the next steps in her business, risk-free.

Tears flowed. The rest of the class erupted with applause. Someone chimed, “Congratulations! You’re the first one of us to get an investor.” It was a special moment for all of us.

After a short break, we returned to our discussion and action steps. But something was different. She sat up straighter. She knew exactly what she would do next. The look in her eyes was now one of confident focus. She had taken the leap, and she knew she would find her wings on the way down.

Since then, she’s sent me an email of the actions she’s already taken and her plans for the next couple weeks. I can’t wait to see how she flourishes.

Something else happened that night, too.

Helping her navigate her fears exposed one of mine. As she gained the confidence to take her next steps, I couldn’t help but think about a project I’d been planning for months. I had an entire yellow pad full of notes, and I’d refined them on the plane the day before. If I took the time to organize it, I had the basics figured out, but I was still waiting for the “right” time.

That night, I committed to move forward. I would write down my plans for the next few weeks, and I would execute them, without delay or excuse. If she could do it, so could I.

Want to be sure you get the rest of the story? Subscribe via email or RSS.