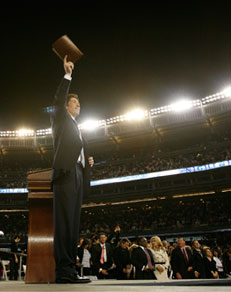 Most mornings this month, I’ve listened to a Joel Osteen sermon from this audiobook. Aside from being a fantastic way to start the day, I’ve learned a very subtle and powerful lesson.

I may be a little groggy in the wee hours, but it didn’t take long for me to realize that he starts and ends each sermon the exact same way – using precisely the same words. That struck me as odd.

Wouldn’t one of America’s best speakers want to utilize a variety of different openings and closings? Wouldn’t he customize it to fit the audience or the day? Wouldn’t he ad lib every once in a while?

When we’re just starting out, we look at the Greats and hope that one day we can perform as effortlessly as they do – being natural, winging it, just going with the flow.

We want to be like that someday, so we don’t have to practice so much. We picture what we’ll do when we’ve arrived – white sand beaches, lots of sun, and plenty of time to relax. We’ll be able to just kick back and enjoy life.

Somewhere along the way, we realize that we have it all wrong. We realize that they perform as well as they do because they put in so much effort. They’re so practiced, it only looks natural.

Jordan lived in the gym. Leno was the first Tonight Show employee to arrive and the last to leave. Van Halen would lock himself in his room for hours to practice. Reagan worked on his lines until he had note cards with bullets for every possible topic.

The truth is the Greats never “ad lib” as they’ve likely rehearsed any script they might need hundreds of times.

The Journey is the Destination

Eventually, it becomes clear: the reason they’re great is because they’re disciplined – and they genuinely enjoy the journey.

Are you doing something you hate until you make it? Do you dream about what your life will be like someday?

I did. Until I realized that someday never comes. The journey to greatness is full of Groundhog Days. And there’s our biggest clue.

Could you be happy if every day was like yesterday?

Forget someday. Focus on that question.