What Dominoes Teach Us About Momentum

When we’re on a roll with a project or goal, it can feel like we’ve initiated a chain reaction where the next step happens without much effort. Just like dominoes toppling one after another, we can literally see our momentum carrying us forward.

There’s some danger in this approach, though.

First, the momentum can carry us farther down a path than we intended to go (without more evaluation). In business, this can happen when you outgrow your cash. Fast-growing revenues are great, but you likely have to pay for your inventory or production first.

Personally, this cycle often leads to exhaustion if I don’t pace myself. 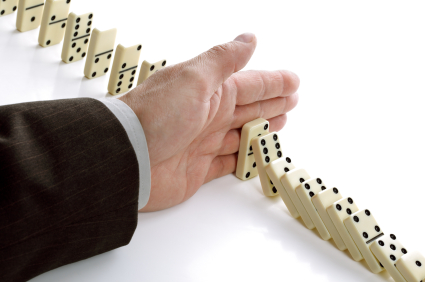 At that point, the only solution is to force a break in the action. This is the equivalent of being down for a few days.

When setting up a large number of dominoes to topple, it is a good idea to make a number of safety-breaks in the sequence. You do this by removing a few tiles at key points in your pattern. 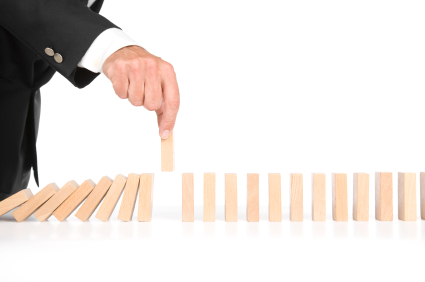 Instead of aiming for the most aggressive schedule possible, what about planning in a few breaks? For a major project, this could mean scheduling a week at key milestones to evaluate the situation and progress – or to simply let the team rest.

For me, I think it provides a guiding principle for my weekly planning. If I start Sunday afternoon and go full steam ahead, maximizing what can be achieved every single day, I’ll be incredibly productive early in the week. But I’ll start slowing down Wednesday, and I’m likely worthless by Thursday afternoon. It also takes me most of the weekend to recover, eliminating my best study time.

Instead, if I pick a few blocks of hours and rest, I can continue at a strong pace throughout the week. After about a month of testing, I’ve learned that I need 2-3 periods of about 3 hours each for it to be effective. It’s also taken me a while to figure out the best activities for these hours. Sometimes I’ll group my chiropractor and a pedicure with a walk on the bayfront or beach. Oddly enough, something else works even better – a movie.

This discovery was very counter-intuitive for me, as I’d really benefited from eliminating television a few months ago. Movies-on-demand have a few key advantages though. One, no commercials (which are my real nemesis). Two, I get to pick the movie (which means the story line is always a positive one). And, it has an ending (which prevents endless sitcom marathons).

Perhaps this sounds familiar to you. Maybe you’ve been alternating between super-productive and crashed, unable to find a sustainable pace between the two. Maybe a planned safety-break is exactly what you need, and maybe you’ll be refreshed by the most unlikely of sources.

If these strategies help you topple more dominoes, I’d love to know about it in the comments below.